Home > Word letter > Seeing the promise is not enough in 2010

Seeing the promise is not enough in 2010

It is my prayer that you will experience the promise of God this New Year brings in 2010. 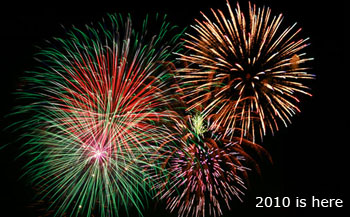 Many of us are familiar with the story of Zacharias and the birth of John the Baptist found in Luke chapter 1. Below are a few extracts from the story.

Now the time had come for Elizabeth to give birth, and she gave birth to a son.

Her neighbors and her relatives heard that the Lord had displayed His great mercy toward her; and they were rejoicing with her.

And it happened that on the eighth day they came to circumcise the child, and they were going to call him Zacharias, after his father.

But his mother answered and said, "No indeed; but he shall be called John."

And they said to her, "There is no one among your relatives who is called by that name."

And they made signs to his father, as to what he wanted him called.

And he asked for a tablet and wrote as follows, "His name is John." And they were all astonished.

And at once his mouth was opened and his tongue loosed, and he began to speak in praise of God.

Fear came on all those living around them; and all these matters were being talked about in all the hill country of Judea.

All who heard them kept them in mind, saying, "What then will this child turn out to be?" For the hand of the Lord was certainly with him. Luke 1:57-67 (NASB)

Zacharias was given the promise of a child (Luke 1:8-13). He doubted the promise and was made dumb (Luke 1:18-20). I doubt this was a punishment but rather a protection from his own disbelief. It does not help the cause of God when we go around telling everyone, including ourself, that God's promise will never happen. That is almost certainly what Zacharias would have done if left with the ability to talk.

When the promise arrived Zacharias saw it, and probably held it, but notice that on the day of circumcision he was still dumb. Zacharias had living proof of God's promise but still did not experience it.

Let's take another close look at the promise Zacharias received.

But the angel said to him, "Do not be afraid, Zacharias, for your petition has been heard, and your wife Elizabeth will bear you a son, and you will give him the name John. Luke 1:13(NASB)

But notice that there was another dimension to the fulfilment of this promise. Elizabeth had a role to play. Notice the vital role she played.

And it happened that on the eighth day they came to circumcise the child, and they were going to call him Zacharias, after his father.

But his mother answered and said, "No indeed; but he shall be called John."

And they said to her, "There is no one among your relatives who is called by that name." Luke 1:59-61

If you do not play your role in the body of Christ others will suffer from your lack of commitment. What do you think would have happened if Elizabeth had played dumb and not protested in the face of her relatives misguided good intentions? Zacharias would have probably remained dumb.

The letter of James tells us that faith without works is useless (James 2;20 NASB). How true this is? The promise was given to Zacharias. He had certainly shared it with Elizabeth. They both knew what God wanted but they still had to act. For them the works required was speaking out.

The relatives had good intentions, yet they had no clue what God wanted.

Do you have the promise that God will give you a new job this year? Then start completing your job applications instead of sitting down and feeling sorry for yourself. The same is true if you need to pass an exam - read and study hard. Need a healthy marriage relationship - stop acting selfishly.

Our words and actions need to come in line with God's counsel for us to witness and experience His promise this year.

It is my prayer that none of us will hold the promise in our hands without experiencing it this year.

God has done His part - now it is your time to act.